Andrés Digital is Producer, DJ and Author and Curator for the Magazin and Label Tropical Bass.
If you want Cumbia, Tropical Bass, Dancehall, Reegae, Moombahton, Electropical, 3ball, Dub and more presented in a Rave style your right here. 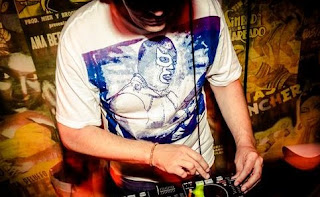 Andrés Digital was deeply involved in creating the Reggae-Cumbia Style and got some instant hits in the scene, like the No No No (I've got your man) Remix or the Wa Do Dem Remix.
Andrés Digital is Author for the Magazin tropicalbass.com and writes the Cumbia Round Up since 2010.
Andrés Digital organized the "Love and Unity" Reggae Dancehall Tropical Party for more than 10 Years in his Hometown Darmstadt at Bessunger Knabenschule. He was part of the Ritmo Fino Crew for 2 Years with regular Dances in the Schlosskeller/Darmstadt and he was resident at Mango Sessions in Heidelberg.

Andrés Digital has about 16 Albums and EPs released. Also there are a lot of single Releases in Compilations.
Beside on his Homelabel Tropical Bass, a lot of releases are on Cassette Exclusivos and Latino Resiste. Also some stuff on Konn, Kumbale and El Flying Monkey
Single Releases on Caballito, WakanTanka, Frente Bolivarista, Sello Regional, Hawaii Bonsai, Folcore, Handiclap Rec., University of Tropical Sound, Moombahton Central, Africa Futura, Faluma, LatinBass MX